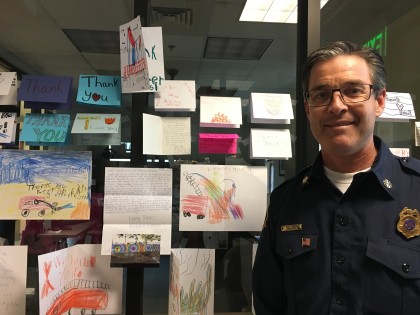 Firefighter was maybe the favorite costume this Halloween. You’re a local hero.

I’m uncomfortable with that label. The heroes are the crew. Typically on a big fire they would be working 24 hours on, 24 off. We had crews on the line from Sunday evening through Saturday, catching bits of rest when they were out there, going to the station for a few hours. No one was willing to leave the line. They had nothing left physically, mentally, but they were absolutely determined to get the job done, to keep the community safe. Everyone came together. Retirees came out. The dedication was amazing. Volunteers from the food community started feeding us from the first. Everyone in the group of commanders had Valley ties — by coincidence the Cal Fire commander grew up in Sonoma.

You grew up here too, right?

That’s right. We lived close to the old Patten Street firehouse and my parents took me by there all the time. I’ve wanted to be a firefighter since I was a toddler. When I turned 18, I became a volunteer for the City of Sonoma Fire Department. Then I went to SRJC where I got an Associate’s Degree in Fire Science, and from there to Sac State for a BS in Fire Service Management.

Ten months into it. I had worked for 27 years in the Pinole Fire Department. All that while I was living in Sonoma, and volunteered for Schell-Vista.

Well, this was surely a “trial by fire” for the new chief.

Both literally and figuratively.

Could you ever have imagined such a happening in the Valley?

Firefighters by nature look at an area, a piece of land, and think, What would I do if there was a fire up Moon Mountain? Or Cavedale or Nun’s Canyon? Or Norrbom Road, Lovall Valley or “Seventh Street? What we never could have imagined was four different fires at the same time. And each one by itself would have been a major incident. It was truly daunting. I struggle for the words to express it. We were responsible for fires from Kenwood down to Schell-Vista, and they lasted for six days.

Was there lots of support?

Yes, for sure. But it was even more challenging because we weren’t the only fires in the county. We couldn’t get as many firefighting resources from outside as would normally have been brought in. But in the Valley it was a real group effort, a community effort. The Sheriff’s Department, the Fire District’s Board, the City, Glen Ellen community – by the way, the District had only begun providing services to Glen Ellen in July.

Anything else that surprised you?

I could never have imagined having to evacuate so many people throughout the Valley. Fire Commanders are the ones who make the decisions; sheriff and police disseminate and enforce them. We – my wife and our three children – were under mandatory evacuation starting Sunday evening for ten days, so I understood how challenging it is to evacuate.

What do you feel now?

The community’s appreciation is very humbling. We have received so much gratitude. We don’t feel like heroes. This is our job. This is what we do. I feel relief that it’s over. But I have so many emotions. Profound sadness for the people who have suffered losses, who lost their homes. And I feel pride in the extraordinary efforts of a whole community that saved so many homes.