Under The Sun: Marilyn Goode, friend of the earth 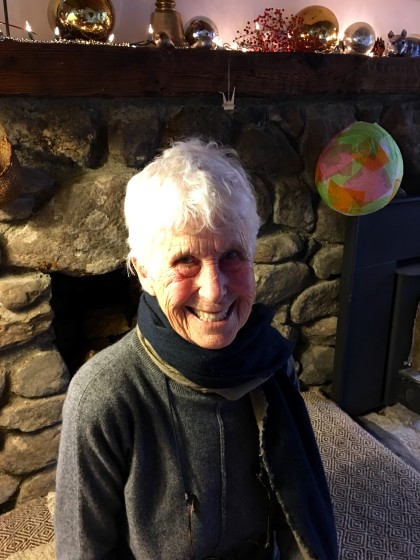 I understand your family has been in the Valley a long time.

Yes, I am an old timer! You know Burlingame Hall at the Church? I was a friend of Carrie Burlingame, for example, who also created the Women’s Club. My parents bought the land I live on–which includes Westerbeke Ranch–for $25/acre in 1935. And my grandfather, John Van Hoosear was an electrical engineer and his company brought electricity to the City of Sonoma in 1906. The Van Hoosear Wildflower Preserve is named after him.

Did you have a happy childhood?

I was born with a silver spoon in my mouth. I had a very privileged childhood growing up in this beautiful place in this beautiful valley with my sisters. I have a twin sister you know, plus my late sister Patty Westerbeke.

And how about this home you live in?

My husband and I built this house in 1976; it was one of the very first solar houses and was featured on the cover of Sunset Magazine.

What’s it like living here in the woods? I said hello to your chickens.

We love the chickens, they think we are the center of the world, but there are all sorts of animals here. It’s a nature preserve! I’m down to two chickens recently due to bobcats. Before that a coyote killed three birds, took one to eat and left the other two on the ground. So all we have now is a boy and a girl, but we’re counting on a new flock! I was called this summer and told “Hey, there’s a big rattlesnake asleep on the deck!” I said, “Leave him alone.” A few days later we caught him and released him well away from the house.

Tell me about your husband.

Fred passed away a couple of years ago. We were no longer together, but still close friends. He was a brilliant man, very intellectual and creative, a teacher. He started a school in Marin and taught at the Thatcher School. I met Fred in New York while I was at NYU. We were married after I returned to California to go to UC Berkeley.

How would you describe yourself?

Oh my. My parents were “Good Republicans” but basically I consider myself a Socialist, a big fan of Naomi Klein. I’m a “Cassandra.” Nobody wants to hear what I have to say or believes me, even though I’m telling the truth.

Yes! I had so much fun! In the end, rebuilding and adding to the existing hospital turned out right. They ended up doing what I had proposed at the very beginning.

I have seven grandchildren, and the world we’re handing them doesn’t look so good. I’ve been an environmentalist since 1969 when oil slicks hit the Santa Barbara coast; I was in the Sierra Club in my 20s. I fought to save the Geysers, opposed the dredging of the Petaluma River and started the Environmental Forum in Marin.

And your current thoughts?

There are too many of us; we need to stop breeding! And we are so wasteful. I’m not very hopeful. I know people prefer to put on a happy face, but need to face up to reality and talk more about suffering and our sorrows.