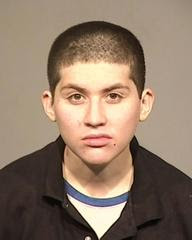 Sheriff’s Detectives have identified 20-year-old Raquel Magana of Petaluma as the suspect who stabbed a 16-year-old boy in Agua Caliente. As of May 8, the suspect was still at large, four days after the attack.

The assault occurred at about 8 p.m. when the victim was riding his bicycle on the bike path in front of the Rancho Vista Mobile Home Park and the suspect approached him asking about his gang status.

When the victim denied being in a gang, Magana allegedly pulled out a knife and stabbed him several times.

The victim was taken to a local hospital and is expected to survive the attack. Following up on leads, Sheriff’s Detectives were able to identify Magana as the suspect. They have secured a $150,000 warrant for her arrest charging her with assault with a deadly weapon and child abuse.

If anyone knows where Magana is located they are encouraged to call Sheriff’s Dispatch at 707-565-2121.