In 1920’s, this is how they treated the era’s most deadly, infectious disease

In 1927, Lynn Downey’s grandmother, Lois, was living in Sonoma with her husband and two-year-old son when she was diagnosed with tuberculosis. As was the treatment in that era, in which TB caused 25% of all deaths in Europe, her only hope was to spend time in a sanatorium, so she entered the Arequipa Sanatorium in Fairfax, in west Marin County.

Founded in 1911 by San Francisco physician Philip King Brown, Arequipa was for women only; it operated until 1957, about 10 years after a TB vaccine was in wide use. Using historical documents and interviews with former patients—including her grandmother— Downey tells the story of this remarkable place of healing in her new book, Arequipa Sanatorium: Life in California’s Lung Resort for Women.

Downey, a widely-published historian of the West, will give a talk about her book and share images and photographs from its pages in a lecture on Saturday, January 11 at 2 p.m. in the Sonoma Community Center. Presented by the Sonoma Valley Historical Society, the event is the first in its 2020 Second Saturday Lecture Series. 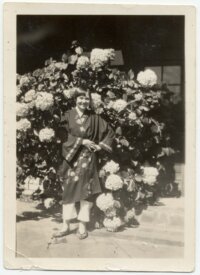 Lynn and the fifth generation of her family to live in Sonoma. She has degrees in history and library science from San Francisco State University and the University of California, Berkeley.

She was the company Historian for Levi Strauss & Co. in San Francisco from 1989 to 2014 and wrote many articles and books on the history of the company and the jeans. Her biography of the company’s founder, Levi Strauss: The Man Who Gave Blue Jeans to the World, won the Foreword Reviews silver INDIE award for biography.

She also just published Arizona’s Vulture Mine and Vulture City, the history of a famed gold mine outside the town of Wickenburg, Arizona, once known as “the dude ranch capital of the world.”

Dowmey retired from Levi Strauss & Co. in 2014 and today works as a historical/archival consultant and writer.

Downey with make a presentation on January 11, 2020 -2 pm at the Sonoma Community Center on Arequipa Sanatorium: Life in California’s Lung Resort for Women