At the Sonoma Plaza on Saturday, April 10, an anti-mask marcher carried a sign that read “I Can’t Breathe.” I called out that her offensive appropriation of those words was wrong. Others in the area spoke in agreement with me. The sign carrier smiled. 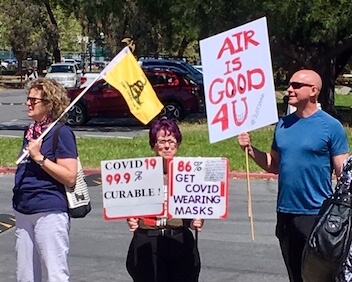 After their two turns around the Plaza, they retreated to the Barracks parking lot. A subgroup remained, filming an interview with three of the women. The “I Can’t Breathe” sign was propped against their bench. When they finished and stood, the sign slid underfoot. One of them said, “You stepped on George Floyd!” Laughter. Another said, “I wanted to write “George Floyd” on it, but I thought that might be too much.” I loudly said, “That would have been very wrong, it’s already wrong that you used those words.” Then I started my phone video. They would not repeat their vile statements for the camera.

This, apparently, is who they are. Using the dying words of a Black man and of a true social justice movement for their own misguided assertions, and laughing about it. 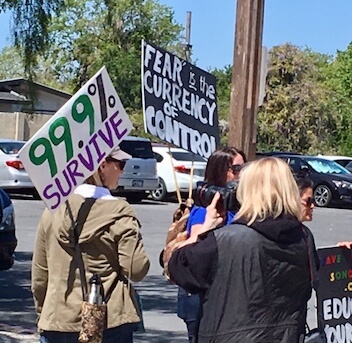 The woman who carried the sign and was interviewed on the bench does not live in Sonoma. She believes that Trump is still president. She believes George Floyd was a crisis actor and the whole incident was fake and funded by Soros and the Rothchilds. This is one of the people speaking for the “Save Our Sonoma” group, and advising against masks and the Covid vaccine. Should we trust her?

49 thoughts on “Cruelty and lies at Sonoma anti-mask ‘protest’”