Sonoma Arts Live: Necessity is the stage-mother of invention 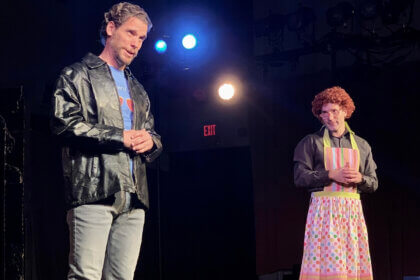 Back and available by demand is Sonoma Arts Live with Elliot & Me, a musical comedy making its Nor Cal debut May 7-8.

The show is based on the sibling arc of successful songwriter Elliot Willensky and his younger brother and now playwright, Steven. It will be available to stream at sonomaartslive.org.

The premise: two brothers have written a two-man show they getting ready to pitch to a legendary Broadway producer. The book and score were written by the New Jersey-born brothers, and when it came time to present it, Steven pitched the idea to Jamie Love, SAL’s executive artistic director.

“When Steven approached us,” she says, “I knew I wanted to share this new work with our audience while we’re all at home waiting for the day that we can gather again.”

Love calls the play a heartfelt story of brotherly love based on the true and powerful bond that has grown through the years. Elliot and Steven both reflect on the volatile ups and downs of their shared experiences – from their raucous “wonder years” growing up in Jersey, to Elliot’s rise to stardom writing hits for The 5th Dimension, Michael Jackson and Whitney Houston, and, eventually, their role reversals, when Elliot’s career hits a few bumps in the road and he needs to rely on Steven for help.

The 18-song score includes several of Elliot’s hits, including “Got to Be There,” “If You Say My Eyes Are Beautiful,” “I’m My Brother’s Keeper,” and the show-stopper, “The Singer.”

The world premiere run of the show had to be scuttled due to the pandemic, Steven Willensky explains, but necessity is the stage-mother of invention.

“We were able to safely stage and film a single performance without an audience which gave us a unique opportunity to partner with theaters across the country,” he said. “One of the first artistic directors I reached out to was Jaime Love, who agreed to view the video. Jaime thought this true, funny, heartfelt musical of brotherly love would be just the antidote for theater-hungry patrons in Sonoma. I am so thrilled to be collaborating with her to bring you this very personal story.”

The production is a collaboration with the Hudson Theatre Works & The Woodstock Theater Group.

Tickets only $12 and available at: http://www.sonomaartslive.org/