Under the Sun: Aaron Marcus-Willers, a year in China 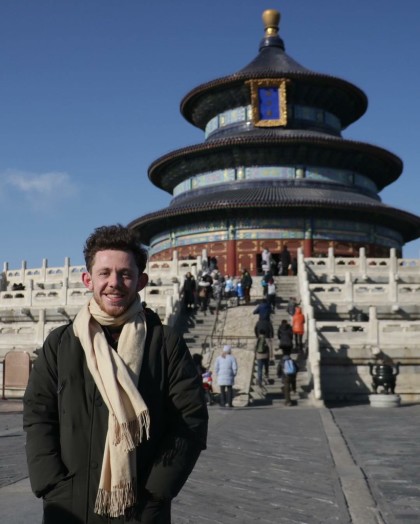 2017 SVHS graduate Aaron Marcus-Willers recently returned to Sonoma after a year in China, studying Mandarin and living with a Chinese family. In the fall he is off to NYU Abu Dhabi. The Sun’s Sarah Ford checked in with him the other day about his international adventures.

What led you to go to China?

When the time for college applications came around, I was a little dise nchanted with school, and ready for a change. As a pretty indecisive person, I knew that taking an unstructured gap year probably wouldn’t work for me. So I applied to a scholarship program with the State Department’s National Security Language Initiative for Youth. I wanted to study Mandarin, specifically, because more people speak it as a first language than any other language in the world. Being able to communicate with that many people could really be helpful and beneficial in the future.

I was intrigued by the chance to live in a country with such a long, rich history and such a vastly different culture. My older brother had done the same program, in Taiwan, and I couldn’t pass up the opportunity to have secret conversations with him in front of our parents.

What were you most looking forward to?

Definitely learning Mandarin, and just living in a place with such a different political system, educational system, and so on. That and gaining more independence.

I have a fairly high level in reading. But speaking is much more difficult. Basically I’m conversational.

You lived with a Chinese family – what was that like?

My host family was super helpful. They worked a lot from home, and often when I’d come home from school my host dad would be sitting there drinking tea and we’d talk.

Did they speak English?

Not really. They had basic book knowledge. So in the beginning it was pretty awkward. I was living in their house and we couldn’t communicate, so we had to use translation apps that are often a little bit off. It got easier after the first month.

Pig brain, lots of chicken feet, which they eat often as a snack, lots of turtle and bullfrog, preserved duck eggs. They eat every single part of the crab, including all the innards.

What were some of the biggest differences that jumped out at you between the US and China?

The educational system in China is extremely rigorous, starting in elementary school. I was at the Chinese high school, and kids were studying from 7 am to about 5 pm and then taking a break for dinner, often staying there, and then working at school, in class, until 10 pm. And then homework and bed.

Are the students stressed out?

Oh, yeah! They are already starting to get grey hair at age 14.

Other big differences that struck you

Public transportation. Even with a population of 1.4 billion, the transportation is so much more convenient than it is here, with high speed rail and busses. It’s easy to get to wherever you’re going. One of the biggest misconceptions about China is that it is less developed than the US. As far as transportation it is way more developed.

Final reflections on your year in China?

My host family and I did a lot of comparing of our lives and customs, and I think the main thing we both took away is that families in China and the US are more alike than they are different.

They were a little surprised at how much food we throw away, especially how many parts of animals we don’t eat that they consider delicacies.

In the fall you’re off for more world travel and another adventure – NYU Abu Dhabi. What prompted that choice?

It was not at the top of my list when I was originally applying to colleges – it’s hard to know if you want to make a commitment like that. They have a semi final round of candidates and they fly you to Abu Dhabi, so I went. They had all these activities with the other candidates, which was amazing. It was one of coolest weekends of my life.

Is that when you decided?

Yes. It was the first time I’d ever been in contact with that many people from so many other countries. There were students from over 40 countries!