Under the Sun: Bill Myers, hiker 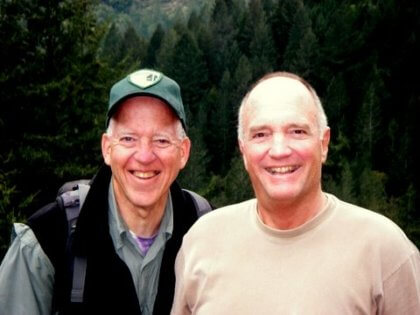 The Sun’s Anna Pier sat down with Bill of Bill and Dave’s Hikes; his partner Dave Chalk (above right) is away until August.

So you and Dave have been leading hikes since 2000? How did it all begin?

Dave and I met in a docent training class run by the Valley of the Moon Natural History Association, in 1999. The idea was to train people as docents for Sugarloaf Ridge, Jack London and Annadel State Parks. Everyone was asked to volunteer five hours a month. Dave and I both liked to hike, so we got the idea of offering a monthly hike in one of those parks.

Have you always loved hiking?

Not at all.  I was a high-energy Type-A salesman whose favorite meal was beer and pizza. I have an  electrical engineering degree and an MBA, and my career was in tech sales and marketing. But I turned up with a heart problem in 1991,  and I changed my life style. I hike every day. I was still working when we started the Bill and Dave Hikes. 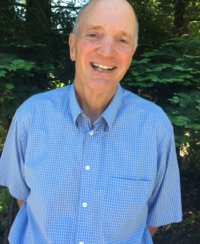 Did you imagine the venture would go so long?

Never. But I was sure we could make a success of it. The VOMNH Association and the rangers discouraged Dave and me, they said they had tried hikes many times, and only got a few people. I told them, Watch me. I’ve been a peddlar all my life. Our first hike was in Sugarloaf in May 2000,with five or six people; by the end of the year we had 20 or so per hike.

How did you grow them?

I built an email list, and sent out blasts after each hike and before the next one. I made a website for us. (billanddavehikes.com.) And some other promo – we sometimes offered a gift to anyone who did five B&D hikes. We would give a park pass or something like that. We created a template:  A free hike once a month, starting at 10 a.m., hiking 8 to 12 miles, going about 1800-2200’ vertical,lasting about five hours. All predictable, all known – like McDonald’s. It is comfortable for everyone. Dave is always at the head, and I am always at the end. We tell them that I will go as slow as the slowest person. By the third year we were averaging 20-25 people on each hike. By the 6th and 7th years, we got up to 70 or 80.

Which park was your first hike in?

Sugarloaf.  We hiked Bald Mountain. And our last hike, celebrating our 20th year, will be there in May, 2020. 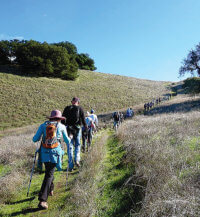 What are some of the reasons people come on your hikes?

There are two main reasons:  you are new to hiking or new to the Valley or both; and you’re a long-timer and you’ve found friends and you come to meet up with them and hike together.  There have been lots of relationships built through our hikes, and a few marriages. Last summer we were invited to a wedding. I found myself seated in the front row and, before the ceremony, the priest asked me to stand, saying the couple wanted to recognize me (and the absent Dave) as the ones who brought them together.

What’s the most people who have come on a hike?  216 hikers! That was for the Fourth of July hike at Sugarloaf. It was publicized in a newspaper story.  Over the nineteen years we’ve led a total of almost 12,000 hikers.

What are some of the most challenging experiences you’d had on the hikes?

Well, the most challenging was when a hiker died. Thank goodness, that is the only time. He was someone new to us, who had come alone for a hike at Sugarloaf, and right at the start of the hike, he just collapsed. There was a firefighter on the hike who gave him CPR, then the EMTs arrived, and finally he was helicoptered out. Probably the worst experience I had was when a mother dropped her very overweight son off for a Bald Mountain hike. She said he was working on a Boy Scout merit badge and needed to complete the hike. The boy, who was way younger than everyone else, began with some disparaging remarks about how he’d beat these older people. But about a third of the way up, he told me he couldn’t go any farther. So I called for the ranger to pick him up in a truck. The boy asked me to sign off on his merit badge, but I refused.

What about some great memories?

On one of our annual Yosemite road trips, a woman had brought along her son’s ashes, which she planned to scatter at the top of Yosemite Falls. She asked me to say a few words.  Dave gave me the moniker “Father Myers.” When we go on our headwaters hike, we always stop at an old Big Leaf Maple, where I like to say a few words of gratitude, for life, for the beauty around us.  Sadly, that tree was badly burned in 2017 and probably will not make it. There’s another story associated with that tree. One day in 2003 or 2004 a ranger called me at home to say he’d found a suicide note that identified the “Big Leaf Maple” as the site. The rangers there didn’t know where it was. I led them to it and we did, sadly, find a body hung nearby.

So when you stop leading hikes, what will you do?

Well, I am a serial do-gooder, and I work to put on Funky Fridays.

How did you get into Funky Fridays?

It began as a way to raise money for Sugarloaf. You probably know that the Park was put on the list for the state to close during the budget crisis, but it was kept open by the Sonoma Ecology Center.  The first season was in 2013. It started as live music in the amphitheater at Sugarloaf, but we were victims of our own success. The events were so popular that it was too many people for the Sugarloaf venue. They are now at the Hood mansion, and county regional parks are the beneficiary.

Who will take over the monthly Bill and Dave hikes?

For the past year we have tried to get another pair to take it on, with no luck. So now we are hoping for a council of a 5-7 longtime hikers who among themselves would find two people for a once-a-month hike. But they still need someone who would do the email blasts twice and month, and tend the website. Maybe a Sun reader will  come forward?