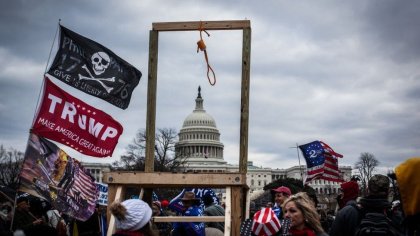 I know it sounds like the title of a 1940’s one-reel 3-Stooges movie, but America’s flirtation with Fascism ain’t no slapstick comedy. At the mention of Fascism nowadays, most people flash on Hitler and Swastikas and concentration camps, which is too bad, because Fascism is so much more than that.

There are textbook definitions of Fascism, of course, detailing its political philosophy, economic implications, corporate collusion, and nationalistic policies; but, in my simpler definition, Fascism is when a cruel state of mind becomes the cruel mind of the state. State-sponsored cruelty is nothing new. The Roman emperor Caligula packed the Coliseum with crowds to watch hapless victims get torn apart by wild beasts. Displays of public cruelty – executions, floggings, slave auctions, brandings, lynchings and the like – fill the needs of a dark beast buried in the human soul.

In America, civilized as we are or like to think we are, overt acts of state-sponsored cruelty long buttressed economic exploitation and suppression of freedom. Starting with the genocidal treatment of North America’s indigenous people by Europeans and extending to the slavery of millions of Africans brought by force to our shores, state-sponsored cruelty and suppression built the South’s economy until the Civil War, and it didn’t end there.

Persecution of “sexual deviants” by law enforcement; the persecution of “communists” in the 1950’s by the Un-American Activities Committee of congress and Senator Joseph McCarthy; the mass-incarceration of people of color on trumped-up drug charges; President Nixon’s embrace of Hard Hat thugs who liked to beat up hippies; racist Governor George Wallace’s overt hate-speech; Ronald Reagan’s and Bill Clinton’s cold-hearted efforts to “end welfare as we know it;” and finally, Donald Trump’s forced separation of migrant children from their parents; the Fascism of State-sponsored cruelty is right at our fingertips.

The image of Nazi Death’s-Head officers dressed in black and barking orders to terrified prisoners clouds our vision. State-sponsored cruelty looks like January 6th, a violent mob intent on insurrection following the orders of a sitting President. Enabling masked and armed poll-watchers to intimidate voters is not a far throw from Nixon’s Hard Hats. Telling pregnant women that, under the penalty of law, they do not have the right to control what happens to their bodies, is another form of state-sponsored cruelty. The list goes on.

Cruelty sells for a while, if those at the receiving end are largely powerless and enough of those who are untouched remain silent bystanders. In her book, The Reproduction of Evil, psychologist Sue Grand details the essential role of the silent bystander in facilitating cruelty and Fascism. Silence, she notes, normalizes.

State-sponsored cruelty speaks through fear. Orwell, in his book 1984, highlights how the prisoner Winston Smith embraces cruelty at the prospect of torture – forcibly attacked by rats. “Do it to Julia,” he sobs, betraying the one and only love in his life. When it’s “them” treated cruelly, Orwell points out, we feel safer. Some of us join the mob. For others, guilt keeps us quiet while the cruelty continues, until that is, it arrives at our own door and by then, it’s too late.

When it comes to Fascism, we ain’t floitin’; we’s foinicatin’.