Skip to content
Voices of the New Majority ~ Loretta Carr 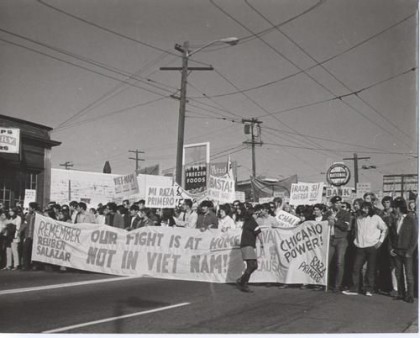 In the late 1960’s the world was in turmoil, much as it is today. American’s youth propelled the anti-war movement, marched for civil rights and women’s rights, and formed groups that sought to establish unity and self-determination. One such group was MEChA, Movimiento Estudiantil Chicano de Aztlán, Chicanos de Aztlán Student Movement.

Its origins stemmed from the first National Chicano Youth Liberation Conference in 1969 at which Mexican American youth met to discuss the discrimination and oppression they were experiencing.

From this dialogue, the term Chicano/a developed to reclaim indigenous ancestry and to unite Mexican Americans under a philosophy of cultural nationalism. More recently we have seen the terms spelled Chicanx or Latinx, a linguistic modification to eliminate gender label delineation. Aztlán refers to the area of the southwestern United States, origin of the Aztec Empire prior to its migration to the Valley of Mexico. Aztlán is a spiritual homeland, preferred to one defined by boundaries on a map.

I witnessed the beginnings of MEChA while a community college student in California’s Central Valley. I am no longer a young student, but I take great interest in learning what the students of today believe is worth their time and effort to organize and take action. I have learned that MEChA lives on in Sonoma Valley.

The Latinx Student Congress is the youth component of the North Bay Organizing Project. This group has partnered with Sonoma Valley High School to organize a MEChA chapter on campus. The group is in its second year at Sonoma Valley High School and is currently mentored by organizing intern Melissa Vargas, a Sonoma State University student. After she graduates in May, she hopes to pursue a Master’s Degree in Ethnic Studies.

The first year saw more male students participating, but this year there are only women in the group. Twelve to fifteen students meet on campus weekly to share updates and discuss upcoming events. According to Vargas, some of the MEChA students participated in the campaign to designate Sonoma a sanctuary city by speaking before the city council. They have also been active in the Women’s March and the Seventeen Minute Observance against gun violence. Vargas indicates that she is excited to have the opportunity to work with these powerful, young women.

Maria serves as president of the chapter. She expresses the group’s goals of promoting political involvement and higher education to students. She sees MEChA as a way for Chicanx students to celebrate their cultural pride and become involved in their community to work towards social justice.

Vice-President Rita states that she has learned more about her own culture that she did not know before joining MEChA. She has also become more forthcoming about expressing her views. “I do have a voice, and I no longer have to keep quiet.”

MEChA members Stefany, Vianey, and Caren agree that MEChA feels like family and is a safe place to express thoughts about topics such as DACA (Deferred Action for Childhood Arrivals) and not be judged. They all encourage SVHS students to join MEChA for their own benefit and to help the community.

The chapter has a Facebook page, MEChA SVHS, where Maria invites the community to read about their activities. They have an ongoing fundraiser to help teachers who were victims of the October 2017 fires because as Maria explains, “They have been supporting us, and we would like to give back.” The group is also seeking funds to purchase sashes for their graduating senior members to wear at the ceremony. Supporters for either of these projects can contact their Facebook page.

The school year is rapidly coming to an end after months of political upheaval and natural disaster. The youth of the nation has courageously stepped forward to assume responsibility for themselves and their nation. SVHS MEChA members have done the same for our community. Organizing mentor Melissa Vargas expresses the inspiration they have gained and their hopes going forward. “This year the students and I are all seniors, so it is exciting to see where the future will take us as we await acceptance letters.”